The following system requirements are necessary to successfully complete this Quickstart. Deviations from these requirements may suffice, or may have other workarounds.

Use the following as a reference for the connector interfaces on the phyCORE-AM572x Rapid Development Kit that will be used in this Quickstart. 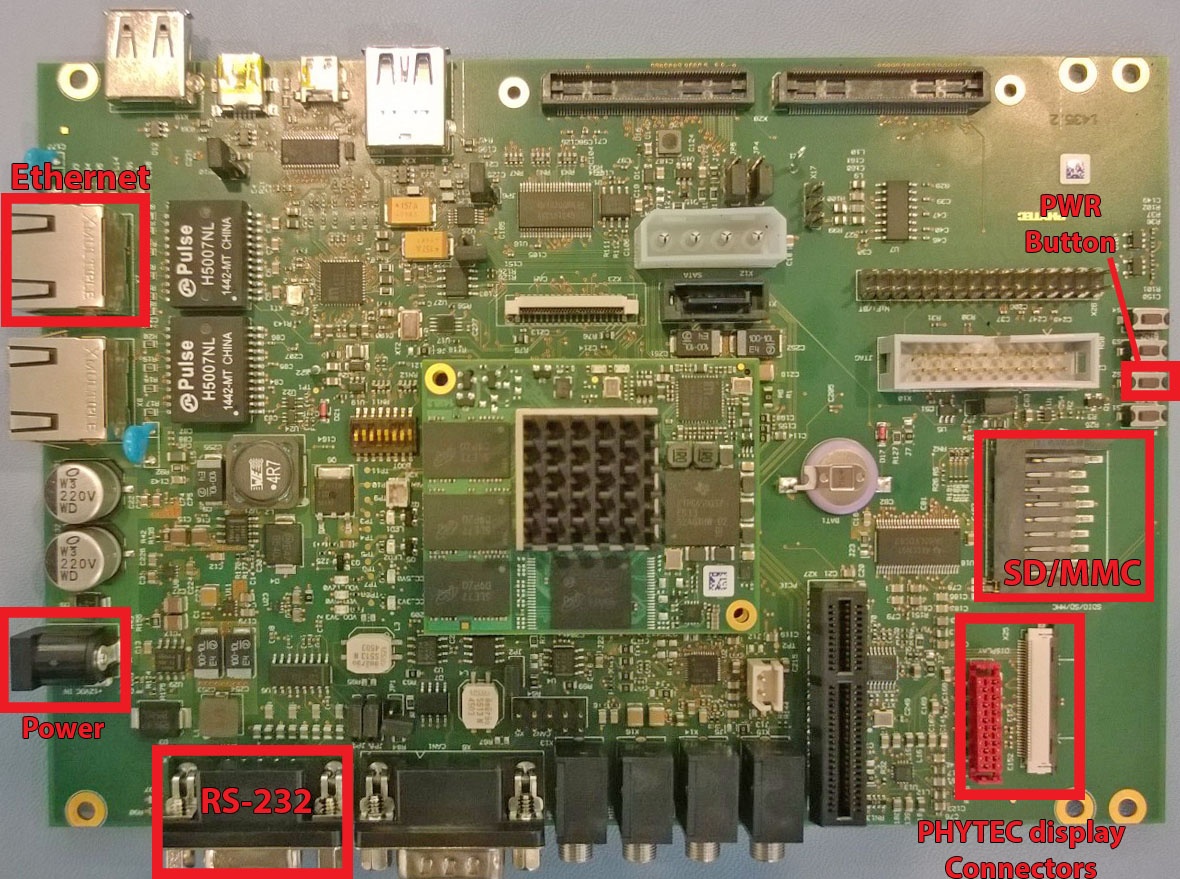 Getting Started With Binary Images

This section is designed to get the board up-and-running with pre-built images.

The section was designed to show you how to boot the phyCORE-AM572x Rapid Development Kit with the pre-built demo images.

Yocto development requires certain packages to be installed. Run the following commands to ensure you have the packages installed:

Verify that the preferred shell for your Host PC is ''bash'' and not ''dash'':

Download and install the repo tool. This tool is used to obtain Yocto source from Git.

Add the repo directory in your PATH, using export from the command line or permanently by including it in .bashrc:

If you have not yet configured your Git environment on this machine, please execute the following commands to set your user name and email address. See here for more information on getting started with Git.

Building the BSP from Source

Create a directory which will house your BSP development. In this example the BSP directory is /opt/PHYTEC_BSPs/. This is not a requirement and if another location is preferred (ex. ~/PHYTEC_BSPs) feel free to modify. We recommend using /opt over your HOME directory to avoid errors attributed to ~ syntax as well as the sudo requirement for the root filesystem and automation package building. We also recommend creating a package download directory (yocto_dl) separate from the yocto tree (yocto_ti), as it makes resetting the build environment easier and subsequent build times much faster.

At this point you will now be able to navigate to the Yocto directory using the $YOCTO_DIR environment variable.

Run the following commands to install the Linaro Toolchain:

Download the Yocto meta layers specified in the manifest file:

Run the Yocto build directory setup script. The TEMPLATECONF variable is used to set the source of the local configuration files (conf/bblayers.conf and conf/local.conf), which are located in the meta-phytec layer:

Open the build/conf/local.conf file using your favorite editor and modify the the download directory to:

Maximize build efficiency by modifying the BB_NUMBER_THREADS variable to suit your host development system. This sets the maximum number of tasks that BitBake should run in parallel. Also set the variable PARALLEL_MAKE to specify the number of threads that make can run. By default, these are set to 4 in build/conf/local.conf:

Be sure to save your changes to the local.conf file before closing.

The setup is complete and you now have everything to complete a build. This BSP has been tested with the arago-core-tisdk-image, it is suggested that you start with this image before building other images. Alternate images are located in various meta layers at yocto_ti/sources/meta*/recipes*/images/*.bb. They can be found using the command bitbake-layers show-recipes "*-image*" in $YOCTO_DIR/build/.

The following will start a build from scratch including installation of the toolchain as well as bootloader, Linux kernel, and root filesystem images.

All images generated by bitbake are deployed to $YOCTO_DIR/build/arago-tmp-external-linaro-toolchain/deploy/images/<machine>:

The build time will vary depending on the package selection and Host performance. Beyond the initial build, after making modifications to the BSP, a full build is not required. Use the following as a reference to take advantage of optimized build options and reduce the build time.

To rebuild the Linux kernel:

We recommend you create your own layer and make changes to the existing BSP there. This will make it easier to update the BSP. Instructions and tips on creating your own layer are available here: http://www.yoctoproject.org/docs/2.2/dev-manual/dev-manual.html#creating-your-own-layer.

Create a recipes-bsp/u-boot/ directory in your own meta-layer to place the bbappend file in. Make sure that the new file matches the .bb file name exactly. Alternatively, you may use % after the underscore in place of the specific version for portability with future versions of the recipe.

For information on how to write a recipe, see chapter 5.3.4 of the Yocto Development Manual: http://www.yoctoproject.org/docs/2.2/dev-manual/dev-manual.html#understanding-recipe-syntax

Adding Packages to the build

There are various ways to add a package to the BSP. For example, packages and package groups can be added to image recipes. See the Yocto Development manual for how to customize an image: http://www.yoctoproject.org/docs/2.2/dev-manual/dev-manual.html#usingpoky-extend-customimage-imagefeatures.

The following instructions demonstrate how to add a package to the local build of the BSP. First, search for the corresponding recipe and which layer the recipe is in. This link is a useful tool for doing so: http://layers.openembedded.org/layerindex/branch/morty/layers/.

If the package is in the meta-openembedded layer, the recipe is already available in your build tree. Add the following line to $YOCTO_DIR/build/conf/local.conf:

If you need to add a layer to the BSP, clone or extract it to the $YOCTO_DIR/sources/ directory. Then, modify $YOCTO_DIR/build/conf/bblayers.conf to include this new layer in BBLAYERS:

The kernel configuration menu allows the user to adjust drivers and support included in a Linux Kernel build. Run the following command from the build directory:

Then rebuild the kernel:

To rebuild the root filesystem:

Board DTS file: Includes all 'dtsi' files that are to be built for this board target, and does not individually handle any nodes.

SOM DTSI file: Includes the processor 'dtsi' and contains and enables nodes for all buses/devices located on the SOM (e.g. eMMC flash).

SOM Variant DTSI files: The SOM variant 'dtsi' files represent the differences between a SOM variant and the fully-featured SOM, or different memory configurations (e.g. disables QSPI NOR if not populated).

Expansion Board DTSI files: Expansion boards are additional boards that add support for additional features and are designed to plug into a specific interface/connector. These files include everything except the hardware pinmux to support the new board's features (e.g. wifi).

The kernel source directory has very good documentation and examples on what bindings are supported for specific peripherals: Documentation/devicetree/bindings/.

The process requires an SD card reader operational under Linux to format and access the Linux partition of the card. If you do not have SD card access under Linux then copying the bootloader and mounting the root filesystem on SD/MMC card will not be possible.

If using pre-built images provided by PHYTEC, the exact image names to download for each step are listed in the instructions below. If you have built your own images, then the images are located in: $YOCTO_DIR/build/arago-tmp-external-linaro-toolchain/deploy/images/<machine>/.

Once the SD card has been formatted, you may update the kernel, root filesystem, and U-Boot individually as well:

The bootloader, one of the key software components included in the BSP, completes the required hardware initializations to download and run operating system images. The boot mode, selected from the S5 dipswitch on the Carrier Board, determines the location of the primary bootloader. Set the S5 dipswitch correspondingly: 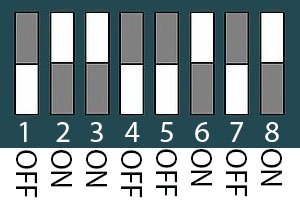 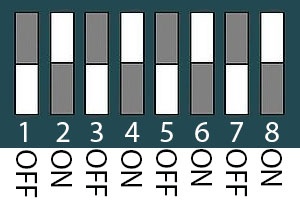 After application of power, approximately three seconds are allotted for the user to hit any key which will halt autoboot and enter U-Boot: 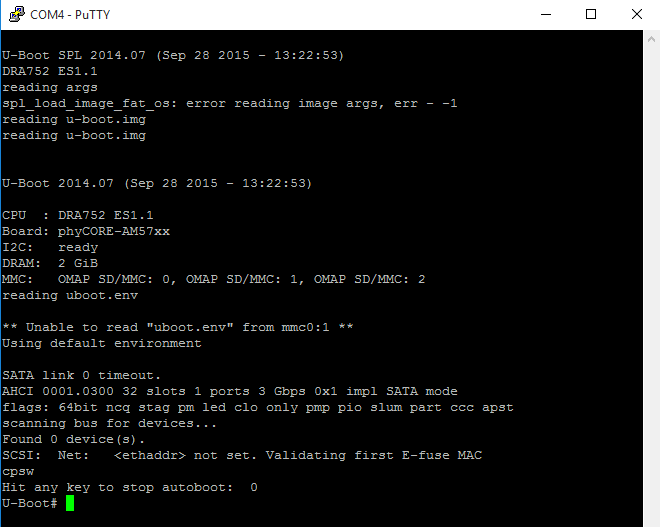 You can check the target's default environment settings by running the following:

The ethaddr variable is the MAC id of the target. This is a pre-programmed value which is read from the E-fuse and matches the sticker on the SOM. Set U-boot's network environment variables to match your required network settings:

Use the following command to verify that all of the environment variables are set as intended:

After confirming the environment variables are correct, save them and continue on to the next section to set the correct kernel and root filesystem boot location:

The target can be booted from on-board media or from a development host via network. In our standard configuration, this BSP release loads the kernel and root filesystem from SD/MMC.

For booting via network, the development host is connected to the phyCORE-am572x Rapid Development Kit with a serial cable and via Ethernet; the embedded board boots into the bootloader, then issues a TFTP request on the network and boots the kernel and device tree from the TFTP server on the host. Then, after decompressing the kernel into RAM and starting it, the kernel mounts its root filesystem via the NFS server on the host. This method is especially useful for development purposes as it provides a quick turnaround while testing the kernel and root filesystem.

To configure U-Boot to boot the kernel from TFTP and mount the root filesystem from NFS, configure the network as described above and then set the bootcmd environment variable to make it the default setting:

By default, the phyCORE-am572x kit is set up to boot the Linux kernel and root filesystem from SD. If switching from another boot configuration back to SD, modify the boot_mmc environment variable and set the bootcmd environment variable to make it the default setting:

Unique boot configurations can be created by defining the desired environment variable settings and setting bootcmd to run its contents. The following is an example:

The board Development Kit is delivered with a pre-flashed bootloader. The following instructions for flashing images from SD card will be useful if you want to:

The images to be flashed will need to be copied to the /boot  or /rootfs/boot/ partition of a properly formatted SD card as described in the Creating a Bootable SD Card section of the Quickstart.

Write a GPT partition table to eMMC. Create UUIDs for the disk and each partition by executing the following on the host machine:

After making all required connections, power on the board and enter U-Boot. Set the UUIDs for the disk and rootfs to the generated values:

Boot into Linux from the SD card, then use fdisk with the following options to write a new GPT partition table to eMMC:

Copy the MLO and u-boot.img from the /boot partition of the SD card (connector X2, mmc0 in U-Boot) to eMMC (mmc1 in U-Boot):

Boot into Linux from the SD card and run the following commands to copy MLO and u-boot.img to eMMC:

Boot into Linux from the SD card, then copy the root filesystem to eMMC:

Copy the root filesystem from the /rootfs partition of the SD card (connector X2, mmc0 in U-Boot) to eMMC (mmc1 in U-boot):